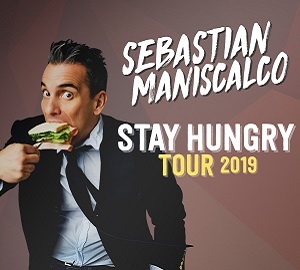 Dubbed “the comedian’s comedian” by PEOPLE, and distinguished by the New York Times as having his “own kind of panache,” Maniscalco’s live performances have become critically-acclaimed events “embraced with thundering applause and tear-inducing laughter,” according to a Billboard review describing his Sept. 8, 2018 sold-out Greek Theatre performance as “devastatingly full-force comedy.”

Still, for Maniscalco, the work continues. Says the comedian, “There’s a voice always in the back of my head saying ‘Don’t rest!”

Purchase your tickets at the Route 66 Casino Player’s Club Box Office or online today!   You do not want to miss the best comedy night in Albuquerque!